Amber is first groomer voted off the island {Groomer Has It}

Fans of Project Runway and Survivor felt right at home in the doghouse this week on Groomer Has It. Amber was sent home by two of her teammates because she did a superior job during the

Challenge. Will, the winner of last week’s show, got to pick his own team of three for the Quick Sniff Challenge: designing a collection of three outfits for a Poodle from each breed class: standard (big), 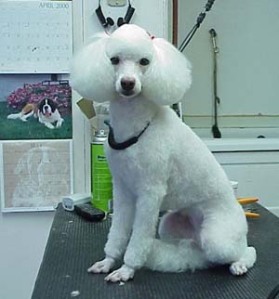 miniature (small), and teacup (tiny). Will also received the added advantage of putting the rest of the teams of 3 together. He should have picked judges’ favorites– show front runners Jonathan and Kathleen, but instead, chose Amber (for her creative ideas) and Jessica (who said dressing up dogs

is “stupid”). The most entertaining team was Jorge, Jasper, and Artist; they had the least designing experience, yet won with their line of red and white satin poodle sportswear. They were picked by two “top designers in dog-dressing fashion.” (Stop. You mean to tell me that there exists such a hierarchy?) Jorge was impressed with Jasper’s cloth-cutting skills saying Jasper cut like “he’s been playing with dolls all his life.” Jasper, a man built like a tank, and who admitted his wife dresses him at home, “got in touch with his inner metro-sexual,” according to Jorge. Watching Jorge, Jasper, and Artist select their “models” grew funnier by the minute. Jasper picked Kenny, a black standard poodle “because he was easygoing and he let me play with his paws.” Artist picked the miniature poodle who had the most “testosterone.”

Artist’s technique comprised of sniffing each poodle butt (this is a unique talent of Artist’s; detecting dog hormones was his method for identifying breeds while blindfolded in the first challenge). Ironically, this dog ended up wearing a cheerleading outfit. Jorge grabbed teacup poodle, Patches: “When I saw Patches, I said, ‘that’s the spirit I need today.'” (At the time, Patches was humping another teacup poodle).

The contestants also had to create their own copy for the catwalk and Artist had the most original with his hip-hop inspired description: “We have here the tough traina. He does not like no complainas. He works hard, he has flair, his bling-bling is hot to wear. He gives us a sweatshirt with a team logo with matching colors–Oh no no!” Their ability to work together and have fun with a tough challenge won over the judges. Jasper, the MIP, (Most Improved Playa), was the overall individual winner.

Now for the bad news: Malissa was singled out by the judges as the worst groomer this week for a single act of shaving a poodle’s “top knot” too far back. You learn something new every week, and I learned that poodles are supposed to have bangs. Sweet Malissa responded by saying that “the eyes are the most

beautiful part of a dog.” But she is safe for now because, as Artist had pointed out earlier, “grooming is 20% of this challenge.” Amber was sad to leave the show, but happy to return home to “build her business and her family.” As if to remind the viewers to keep life in perspective, she shared with us her happy news that she is pregnant.

What’s next? The groomers will be tested on their EMT skills. Can they perform CPR on a dog? There is more to the dog grooming profession than grooming!

This entry was posted on Sunday, May 4th, 2008 at 9:28 pm and is filed under blogs, Comedy, Critics, Dog Fashion, Dog Grooming, Dogs, Entertainment, fashion critique, Groomer Has It, Humor, Mature Content, Media, News, pets, Pop Culture, Reality TV, tabloid press, Television, Uncategorized. You can follow any responses to this entry through the RSS 2.0 feed. You can leave a response, or trackback from your own site.