Matt, Louross, and Jenn crash and burn in Hell’s Kitchen 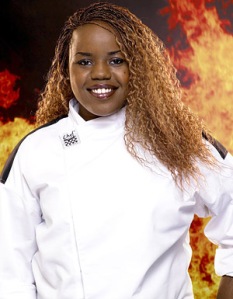 Chef Jenn looks so sweet in this photograph, but her teammates saw a different side this week. Jenn managed to lose the first challenge by not putting sauce on two of the dishes. For their punishment, the Blue Team had to become a maintenance crew and scrub the outside of the restaurant. Lourross tried to lighten the mood by pulling his work outfit over his head to which Jenn said, “You’re stupid and you got a wedgie.” Bobby thought Jenn was being bossy and said the quote of the week: “I come in peace, but if you break my sanctuary, you will feel it.”

Both teams completed dinner service (barely) this week, but still managed to gross-out Chef Ramsey and his guests. Petrozza was busted for putting dirty lettuce leaves in a shrimp cocktail. Louross sent out raw steak, prompting Chef Ramsey to cry, “Raw Steak!!!” and round up the Blue Team to come over and “feel the meat.” Is this what really goes on in a restaurant kitchen, or just a TV kitchen? 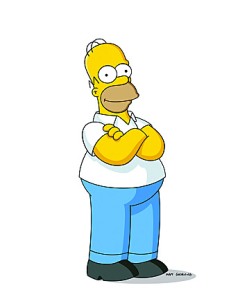 was the reason the customers were sending the appetizers back for being too salty). Matt tied a dinner napkin around his head to try to fix the problem, but Ramsey just made fun of him for wearing a diaper around his head and acting like a baby. “This is not The Simpsons, Homer,” he said to Matt after the dinner service. Cory begged Matt to “cook like a normal person,” but nothing helped.

Meanwhile, Jenn undercooked her first dessert which prompted Ramsey to tell her to “F*** Off!”

Ramsey let Petrozza pick two teammates for elimination as well as choose which one of them should go home. Petrozza chose Louross for his lack of skills. Then Ramsey called Matt and Jenn forward and told them to take off their jackets and switch teams because he was “unconvinced by the both of them.”

To Jenn: “you may be able to manipulate your team, you can’t manipulate me.”

To Matt: “You’re lucky to be here. Look around. You’re out of your depth.”

Needless to say, neither team was happy about this switch.

But as usual, Gordon had the last word: “Louross was never short on energy. He was just short…(pause)…on cooking skills.”

From the previews it looks like Matt becomes even crazier next week. I predict Ramsey will eliminate Matt or Jenn (or both) next week.

This entry was posted on Wednesday, May 28th, 2008 at 7:06 pm and is filed under blogs, Chef Ramsey, Chefs, Drama, embarrassing moments, Entertainment, Food, FOX TV, Gordon Ramsey, gourmet, Mature Content, opinion, PJ Bottoms, Pop Culture, rants, Reality TV, Restaurants, talent, Television, Uncategorized. You can follow any responses to this entry through the RSS 2.0 feed. You can leave a response, or trackback from your own site.