Diddy For President! {I Want to Work for Diddy: The Man, the Myth}

The preview episode for Diddy‘s (aka Sean Combs formerly known as P. Diddy, formerly known as Puff Daddy) latest reality tv show I Want to Work for Diddy: The Man, the Myth reminded me a lot of a presidential campaign–with one exception: I understand what Diddy is talking about. Diddy presents himself as a no-nonsense boss that can get things done. I’m not saying that Diddy can navigate domestic and international political waters, but I haven’t heard much from either Senator McCain nor Senator Obama about what they plan to do. It’s always about what they believe–the rhetoric of beliefs. That said, the upcoming National Conventions will be pretty boring. (Exception: How is Hillary Clinton going to ask the Democratic Party to support Senator Obama when she argued so vehemently against him? Stay tuned!) Here are some quotes from Diddy that would liven up the conventions:

To succeed in anything in life you need a vision. If you can’t see the forest through the trees, you need to chop them mother f****ers down.

If you gave it you’re all, that’s the kind of performance I judge. I judge your heart. You got to go hard or go home.

Sleep is forbidden. When I’m working, I’m a machine and I don’t look at other people like they are human.

You got to be able to make a way out of no way.

I sometimes feel sorry for people that don’t work for me, ‘cuz I know they not be having as much fun. 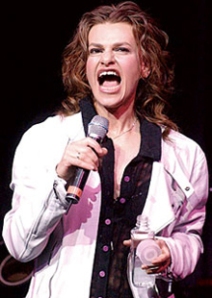 Comedian/actress/author Sandra Bernhard was the guest judge on Project Runway this week. Her comment on Terri’s outfit was one of the most original I’ve ever heard. She looks like she could pull out a knife and say, ‘I’m going to cut you!’ ‘This was made all the more funny when Michael Kors said that she looks like a girl you want to meet. It was a nice break from the usual: It does not look finished to me, it is not well executed, it’s chic looking, I would wear that, she knows how to dress a woman…

Why wasn’t Blayne in the bottom three? His dress looked like a black shift with blobs of Play-Doh stuck on it. It wasn’t as bad as Emily’s Carmen Miranda dress, but it was a close cousin! Maybe they kept Blayne because he taught Tim Gunn how to say, “Holla to your boy.

I thought Leanne’s black dress was amazing, and I preferred it to Kenley’s outfit. Kenley reminds me of Season 3’s Ulie with her love of prints!