Dr. Phil has often said that his guests are “teaching tools” (aka guinea pigs) for the viewing public  This week, three fighting couples enter the Dr. Phil House, a virtual Habitrail, to teach us what I learn from most of his episodes–that I am way better off than those guests!  The most notable difference between these couples and past feuding family members is that these three women are as aggressive (if not more) than their husbands and are able to stand up to Dr. Phil without looking too stupid.  Aside from the “teaching tool” motive, is the linchpin of Phil’s calling in this world: To Save the Children.  I side with him on that issue and it is one of the reasons my TiVo is still set to The Dr. Phil Show.

Viewers were surely annoyed that they had to wait a half hour before getting to the “Drunk Gretchen” scene at Tamra’s so called formal dinner party, a party so embarrassingly distasteful, I thought the hired chef, Brian Malarkey, might torch the entire table with his fire-themed deserts.  The big storyline “Tamra gets Gretchen drunk to bring out Gretchen’s dark side,” apparently backfired on Tamra when Gretchen and Tamra’s son, Ryan, looked like they were

Tamra's son, Ryan, brings out "The Dark Side of Gretchen"

going to “hook up.”  Ironically, Tamra stated in an interview segment that a person’s actions are more important to her than what a person says.  She was referring to Gretchen, but Tamra might have well been looking in a mirror. Gretchen has no one to blame but herself for drinking too much Tequila, but Tamra kept ordering her son to bring Gretchen shot after shot as well as encouraging everyone else to go along with her scheme.  The most entertaining part of this whole fiasco was that the other housewives looked mortified at what was happening.  It was clear that none of them wanted to be there; Jeana was the only one who made any attempt to socialize, and the husbands just sat back and watched as if they had front row seats to the WWE. 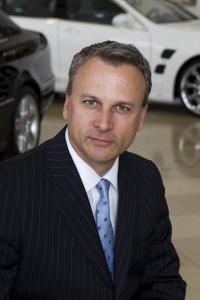 Simon Barney in his pre-Tequila days

The men reminded me of the husbands from The Real Housewives of Atlanta who sat back at numerous dinner parties and watched their alpha wives mark their territory. Bottom line:  Tequila doesn’t lead to bad behavior, Tamra Barney does: she embarrassed herself, her guests, her etiquette teacher, the chef, her husband and his new Tequila brand business venture, and me—for admitting I watch this show.  Calling her son a “manwhore” didn’t help either, and hopefully that phrase will not become Ryan’s latest tattoo.  The funniest line from the show, however, did come from a tipsy Gretchen: I have big boobs, I con do what I want. Click here for Bravo TV’s rogue’s gallery of photos.

P.S. As of today, Vicki is the only housewife to write in about last night’s episode:

I had a great time at Tamra’s dinner party. It was fun getting all dressed up for a formal party at home instead of going out to a restaurant. All of our homes are so beautiful and I feel we don’t spend as much time in them as we should. It was amazing having Chef Brian Malarkey cook for us. It was overwhelming to watch how much work goes into the preparations for each dish. I have been to his restaurant Oceanaire in San Diego a few times, so it was nice to experience his menu and

The only reason I made the comment at dinner about Lynne being so laid back was because I have never been around anyone like her before. It seems like nothing would ever bother her at all, and it doesn’t seem like she has a care in the world. Coming from me, Ms. Type-A Personality, it is nice to see someone with that level of calmness.

Yeah, right.  (I guess she forgot about almost vomiting over the oyster appetizers).

Lauri Waring aka,”Mrs. George Peterson,” has left The Real Housewives of Orange County in the middle of the fourth season.  Bravo TV had preempted this episode as “shocking,” but Lauri exited quietly to spend more time with her family.  From the previews, I was expecting Vicki to have a hissy fit and leave the show amid some kind of scandal, but that didn’t happen.

I think Lauri’s reasons for leaving Housewives are similar to Tammy Knickerbocker’s; she and her kids need time to deal with things privately.  She said that she hopes she doesn’t offend anybody by leaving, but why would she?  Lauri has been an easy target of criticism by fans of the show, yet any negative remarks probably stemmed from jealousy.

Vicki, Quinn (a one season housewife) and Lauri at last season's cocktail party

Even during the first season Vicki remarked that it is easy to be jealous of Lauri because Lauri is prettier, skinnier, and has bigger boobs.  But Vikki goes on to say, “I’m rooting for her..I just want her to succeed in life.”  At the opening of the first season, Lauri had been working for Vicki’s insurance company for 3 years.  Newly divorced and living outside the gates in a townhouse, Lauri said she didn’t need to work when she was married, but now she had to work to support her family.  We all could see that Lauri wasn’t happy with her change in lifestyle, especially when everyone around her seemed living on easy street.  But I had to give her credit for making the best of her situation, and striving to be a good parent to her less than perfect kids, and many viewers could relate to  Lauri’s day to day adversities.  But when Lari met her soon to be husband, real estate developer, George Peterson, the collective claws came out and Lari was labeled a “gold digger.”

This photo is from "georgeandlauri.com"

Lauri’s wedding was beautiful, almost dreamlike in atmosphere, and George remained laid back and in love throughout.   Their married life seemed so serene…I would love to stop over to Georges unpretentiously decorated house for ice tea and prune roses with Lauri before heading out their ranch to ride horses.  I think fans were waiting for change in Lauri, and she has changed a little bit.  On the first episode of this season, while she was eating dinner with George at The St. Regis and calling him “Babe” every other breath, she said that she didn’t want to go to Dubai for their honeymoon because it was “too commercial.”  (Gag)  The titanium credit card (another gift from George) was another vapid moment.

However, Lauri has remained true to herself: honest, humble, strong, beautiful, and in my opinion, the one of the more REAL housewives in  Bravo’s  Housewives series.  I will miss her and I wish her all the best with her family.

Dr. Phil did not “get real” with Grandpa Al {Dr. Phil Show}

Once I heard that child molester, Grandpa Al, was back on Dr. Phil to state his case, I was ready for Dr. Phil to lay on the “get real” rhetoric. In fact, I was looking forward to having Al put in his place. However, the Dr. Phil Show made a conscious decision to treat this family with dignity and respect. Unlike “The Sister In Law From Hell” family, Dr. P did not use them as “teaching tools.” In spite of the polygraph results from the last show, Dr. Phil only recommended pastoral counseling for Al, and separate counseling for Al’s wife. Ditto for Sherry-Lynn and her husband. What disturbed me was that Dr. Phil did not recommend (at least publicly) that Grandpa Al stay away from his 12 year old grandson, Parker. What about protecting the children? Dr. Phil always says he’s on the side of the children. If their situation takes a turn for the worse, CPS will be very interested in this episode.

Did anyone catch the “Brat Camp” episode? A couple of those kids were scary.

I enjoy family feud episodes like today’s Sister in Law from Hell because Dr. Phil is really in his element. Guests whip themselves into a Jerry Springer-esque frenzy and Dr. Phil turns down the volume with rhetorical questions like: Do I look stupid to you? No seriously, did someone tell you I wasn’t very smart? I’ve yet to see someone reply, “Actually Dr. Phil, I met 10 people waiting in line this morning who said you weren’t very smart.” But no one ever acts defiant; individual family members are too busy justifying their own point of view. In-law strife episodes have been cloned hundreds of times with different families, but there was so much animosity between today’s family, I think Dr. Phil could not afford the liability of tossing them into “The Dr. Phil House” and letting nature

take its course. Dr. P made it clear that if they sit on his stage, they become his “teaching tools.” So what is the difference between a teaching tool and a guinea pig?

Bottom line: No single person is the the only cause of family chaos. Take ownership of your role in creating the drama and kicking up the rhetoric.

Dr. Phil-ism: I tell ya’ if insight was lard, I couldn’t drink a skillet out of the whole bunch. Translation please?