Will Shawn Johnson be happy with Silver Medal? 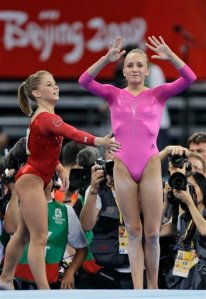 Shawn and Nastia are happy rivals

Hopefully. She was quoted saying, “I gave my heart and soul out there. Nastia deserved the gold.” But there was sadness in her eyes; maybe not for winning silver, but probably because the All Around Finals are over. Athletic rivals couldn’t ask for a better competition; both were healthy and performed near flawless routines. But leading up to the Olympics, Shawn Johnson was the headliner on the women’s team. She was to be the next Mary Lou Retton. It’s evident the media still wants Shawn in the spotlight because the pair has been called “The Golden Girls.” Well the fact is that there is only one gold medalist, Nastia. I can’t picture both Johnson and Liukin together on the Wheaties box. Honestly, if Johnson won the gold, I really don’t think they would be calling the pair “The Golden Girls” because Johnson had such a good story, and it’s the story that connects the athlete to the audience. Johnson won the last two national and world titles; she is 16; Beijing is her first Olympics; she is from Iowa; she trains only 4 hours a day and attends public school; her coach was born in Beijing and his gym was damaged in the flood. Then there is the legacy angle: Although Carly Patterson was the last American to win the All Around gold medal in 2004, Johnson has been touted as “the next Mary Lou Retton.” Why? Well both Johnson and Retton perform “explosive” gymnastics and both have that All American Smile, and as a bonus, both Shawn and Mary Lou’s smiles are genuine.

But Nastia is different: she is not cute, she is beautiful and has beautiful long limbs. Her artistic gymnastics style will not be compared to Mary Lou’s and this is a good thing in my opinion. Mary Lou said in her Today Show interview that Nastia came in as former World Champion and Mary Lou was “an underdog.” (Meow). What Nastia brings the the post Olympic story is an expanded definition of “All American.” Her parents are former Soviet gymnasts who came to America and opened a gym. More importantly, Nastia’s win puts more distance in the Karolyi dynasty. By not being the next Mary Lou, Nastia will in no way be associated with “Bela’s Girls.” I think it is time that Nastia’s father get some credit. It was wonderful to see the individual coaches encourage all the girls on the American team. They seemed so comfortable with each other. They looked like a real team! Marta’s role was that of manager, not coach.

Nastia and Shawn are both good role models, and hopefully they will become better role models as a pair. With a rivalry, only one person can win. From watching Shawn and Nastia I’ve learned that yes, one person will win, but both can help each other do their best. Although Shawn Johnson won the silver medal, she couldn’t ask for a more perfect Olympic experience.

Will Hillary and Barrack really unite for change? {The Today Show}

Saturday morning I watched a segment of the Today Show when Lestor Holt interviewed (via satellite) two campaign face-people who said each camp is putting on a united front against the common enemy, John McCain. Holt’s bottom line was that these two senators have been campaigning against each other for months now, so has either one altered his or her platform? Has Hillary Clinton publicly conceded yet? From the stage in New Hampshire, Senators Obama and Clinton looked like equals on the Democratic Presidential ticket, and honestly I couldn’t tell who was running for president and who would be the running mate. I felt Hillary showed more confidence in herself and her party than with Senator Obama. It was strange because I got the vibe that Hillary felt that she could still win, or that Barack Obama could win only with her support. I guess I was hoping for a show of humility and honesty from Hillary, but from my perspective it was another exercise in the Clinton family’s self-importance in American History. I don’t think Hillary will be satisfied as Vice President, even if she would be the first woman Vice President. She wants a larger role on Capitol Hill, and if Barack Obama doesn’t realize this, he’s in for a rude awakening. I don’t think he’s that naive: offering to help Clinton pay down her campaign debt was a brilliant political move; it highlighted her enormous debt and made him look sympathetic. (I’m sure his gesture drove Hillary crazy) Senator Obama declared, “She Rocks!” in New Hampshire, but I don’t think he’d say that if their positions were reversed. There is so much at stake for the Democrats in the upcoming election and so much opportunity to make history. I will miss Hillary and Barack campaigning against each other. I only wish Jon McCain could have had the opportunity to verbally spar with a strong Republican opponent.

The following video illustrates why I question if the new “Unite for Change” rhetoric is genuine.