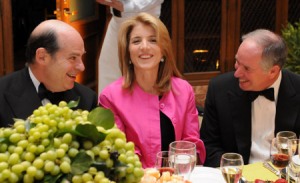 being photographed eating in public.  According to Limbaugh, it’s a “rookie mistake” to be photographed eating, let alone in public.  He said no one wants to look at a picture of someone with their mouth full of food;  however, because Caroline Kennedy is so thin, he was apparently happy to learn that she was actually eating in the first place.  Limbaugh looked to the Pope as a role model in this public relations arena;  Pope Benedict refused a dinner invitation to the White House because he doesn’t eat in public.

El Rushbo then moved on to reveal Burger King‘s latest product: Beef Scented Cologne.  Apparently market research revealed that people enjoyed the smell of  the inside of a Burger King restaurant, and wanted to carry the scent with them between meals.  (Be be on the lookout for these scent wearers

running down the street from a pack of dogs)!  Limbaugh said that Burger King’s customers “smell bad enough” anyway, so it isn’t going to make a difference.  I think Limbaugh should help out the economy by hiring anther joke writer;  El Rusbo’s next bit was offering his own line of bath and beauty products for purchase on-line through the EIB Network: Trans Fat Soap-on-a-Rope.  No Thanks.

On May 10th in Crawford, TX, the the first family let Jenna have her day away

from the political climate in Washington, safely ensconced at the ranch surrounded by family, friends, and the Secret Service. I thought the first family’s first wedding would be a footnote in the mainstream press, but the May 26th edition of People Magazine featured the festivities on it’s cover. Jenna’s nuptials were given all the schmaltzy reporting schmooze of a celebrity wedding.

Although Jenna chose to have her wedding at the family ranch in Crawford, her plans to offer the ranch for weddings to her celebrity friends could generate the same excitement as White House weddings did in the past.

Jake Tapper is ABC News’ Senior National Correspondent based in the network’s Washington bureau. He writes about politics and popular culture and covers a range of national stories.

–>People Magazine reports that in an appearance on Ellen to air this Wednesday, First Daughter Jenna Hager (nee Bush), sitting with her mother First Lady Laura Bush, tells Ellen DeGeneres that she can use the President’s ranch in Crawford for DeGeneres’ pending same-sex wedding with actress Portia de Rossi.

“So, the ranch was a great place to get married,” DeGeneres says, “it looked like nobody could fly over and get pictures or bother you, really.”

“So, can we borrow it for our wedding,” DeGeneres asks. “Can we get the ranch?”

Jenna Bush is either a Republican Repel or an American Ambassador for Equal Rights. Hopefully, W will continue to support his daughter. Jenna’s post-wedding publicity tour for her charitable causes will most likely generate more press (both mainstream and tabloid) than her actual wedding.

It’s been 37 yeas since President Nixon’s youngest daughter, Trisha, had the first outdoor wedding at the White House.Trisha was featured on the cover of Life Magazine in 1971 as well in a multi-paged feature story showing off all her wedding gifts. In July of 1985, Life Magazine also featured Caroline 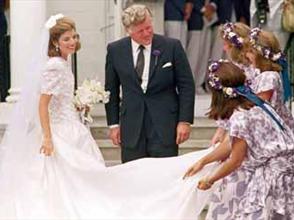 Kennedy on the cover. She beat out Sarah, The Duchess York (aka Fergie) who wed Prince Andrew that month as well. There was synchronicity in both weddings in the same month: America had it’s royal family, too. Life reminisced about Caroline: how she rode her pony, Macaroni, on the White House lawn and how she posed for a wedding photo beside husband Ed Schlossberg on the beach where she “summered as a child.”

You can still get those happy feelings of yesteryear by reading blogs like dallasbrides.wordpress.com and weddingbee.com, whose writers have knit together past and present histories of family celebrations and American Presidents. I found the following links to be interesting:

3 ) NPR weighs in with their article White House Weddings: Fuel for Capitalism

4) Take a look at pictures of past white house wedding memorabilia (Circa. 1966 bag of rice, Circa. 1886 satin covered cake box) in the Life and Death at the White House page at The American Presidency website