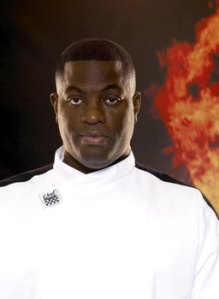 Communication was key in Hell’s Kitchen last week, and it was Bobby who ultimately failed. The fact that Bobby “cremated” rather than cooked the Beef Wellington, according to Chef Ramsey, didn’t help him either. The final four chefs had an individual “cooking school” challenge–teaching a non-cooking, scantily clad housewives how to prepare homemade pasta with fresh lobster and sauce. Christina came out on top with Corey, a close second. Chrisitina, a Culinary School student, probably had an advantage here. Petrozza and Bobby were too distracted by their students’ large melons to focus on the tasks at hand, and Jen struggled with letting her student prepare the meal without interference.

Neither Jenn nor Corey were happy for Christina (surprise). Jenn said, “I just wanted to booty-bounce her across the room.” Again, cleaning Hell’s Kitchen was the punishment. Hell’s Kitchen is gross, and this week we got to see the black crusty bits in the fryer and the ice cream scoop stuck in chocolate. The chef’s made it through dinner service and Chef Ramsey targeted Bobby to harass, but Jenn also felt the heat. For once I felt that Jenn didn’t deserve the wrath of Ramsey, but she made the mistake of sticking up for herself–a big no-no because to Ramsey, sticking up for oneself means questioning King Gordon.

Both Christina and Corey would have liked to have seen Jen go home, but at least Jen can cook a decent Beef Wellington.

As I expected, Matt left Hell’s Kitchen this week. Ramsey made it clear that Matty was just a

“fraction” worse than Corey and Christina . Matt and Christina had traded “shut ups” the entire day after losing the individual challenge. It was a close call between Christina and Matt and for a minute it looked like Ramsey was leaning towards sending Christina home, telling her that she needs more experience. But Christina stood her ground, stating that she is only getting better each week of the competition. Matt’s exit was memorable; there were flashbacks of his victories (the best Risotto in Hell’s Kitchen) and defeats (making Ramsey throw-up during the first episode) and then Ramsey waxed poetic with the following limerick:

There once was a boy named Matt,

He was far from neat.

He was miserable on meat.

So I kicked him out

The other chefs offered their opinions about Matt this as well :

Christina : Matty, you’re driving me f***ing up the wall, bro. You’ve got to close that mouth sometime.

Petrozza: I am relieved Matt’s gone. You know what? I’ll be relieved when Matt’s in a different state. Make sure you lock the door behind that guy.

The chef’s became one team (Black) instead of two (just like Survivor when the tribes merge). Ramsey paraded out two big bald guys dressed in Blues Brothers

get-ups and carrying a quarter of a million dollars in cash in tow suitcases to get the chefs motivated to win. Jen won the first individual challenge (a Top Chef Quickfire) with her thinly sliced rib-eye. However, this challenge proved that this group had culinary skills. Jen chose Corey to accompany her to Vegas to have dinner with Chef Rock, last season’s winner. The rest of the group had to bring in the restaurants deliveries. Christina took charge which annoyed Matt. By the time, Jen and Corey returned, Matt had a migraine. The chefs still couldn’t communicate, so it was business as usual during dinner service: Cory burned her hand, blew oil on his face, Chef Ramsey yelled,”Raw Meat!” and made everyone come over and feel the difference between raw and overcooked meat. Then Ramsey threw a steak across the kitchen (yummy). Jen made an

excellent batch of Risotto and then over-salted the next batch. Christina and Bobby seemed to share a brain when each of them cooked a combination of meat, chicken, or fish in the same skillet. Petrozza reminds me of Pigpen of the Peanuts characters. Ramsey said, “You work like a pig, yet you produce such amazing food.” It looks like the chefs won’t get a chance to team, start uniting as a team,” according to Ramsey, because next week they will be running a “cooking school” for scantily dressed models.