Richard made it clear from the onset that he didn’t think Lisa had the talent to be in the final four, and later referred to her as “a gray cloud in the kitchen.” However, Lisa arrived in Puerto Rico with a new haircut and ready for the challenges. For the Quickfire Challenge, the chefs had to cook with plantains for celebrity guest judge, Wilo Benet. There were a couple of amusing moments: when the timer went off, the chefs raised their hands without Padma yelling, “Knifes down! Hands Up!” Richard managed to singe his eyebrows and sound like a woodpecker when chopping. Stephanie won the Quickfire, and as a reward she got to pair-up chefs with sous chefs (season cast-offs). Stephanie picked Dale because she “has known him for about 10 years.” Richard was paired with Spike (who sported a new hat), and Nicki was assigned to Antonia. The paring of Andrew and Lisa could have produced a lot of drama, but Andrew announced, “Never have I thrown somebody under the bus. I play with honor!” He kept his cool throughout the preparations, despite Lisa acting more than a little bossy. Richard brought along a roll of bright green painters tape to make labels and this “ingredient” helped to keep him organized the small kitchen. Dale had a brain fart and left the pork belly out on top of the stove overnight, but with Dale’s help, Stephanie managed to improvise and wind up in the top two with Richard. Her food sounded delicious (especially the Pork Satay on a Sugar Cane skewer with miso almond sauce and cilantro vinaigrette) and for a fraction of a second, I forgot that the chefs spent 7 hours dismembering 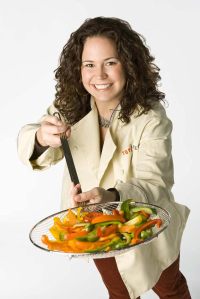 pigs. I was surprised at the decline in Antonia’s performance during this this episode. She had said that on the hiatus, she had been “working 100 hours a week” at her restaurant, so that may explain why she was not in her usual top form. Lisa had practiced cooking Puerto Rican food at home, and came to Puerto Rico familiar with the local ingredients. Antonia ended up leaving for her “unsophisticated dishes” and “undercooked pigeon peas.” I made the mistake of wasting a few minutes trying to figure out the judges’ decision: didn’t Lisa have several less than successful dishes? Lisa did make great garnishes and dipping sauces, but personally I would have passed on her Roasted Pork-butt. Baring any more undercooked lentils, Stephanie is a the strongest contender for the final two. Lisa will be a big surprise if she lasts another week. Richard’s past performances have been uneven, but he won the elimination challenge this week—and a car!

Season 2 runner up, Sam Talbot was the guest chef this week on Top Chef Chicago. Sam, a diabetic and son of a police officer, asked the chefs to create sexy salads and healthy and hearty boxed lunches. Dale and Stephanie came out on top and won praise from the judges who said that their dishes were satisfying, great tasting, and healthy. Despite being criticized by Antonia for only being able to

cook Asian food, Dale won this week’s challenge with his marinated bison in cabbage cups. As a reward, he received a Rutherford Hill 2002 bottle of Merlot and two tickets to visit the Rutherford Hill’s winery in Napa Valley, CA.

Spike, Andrew, and Lisa ended up as the bottom 3 for their failure to deliver a healthy boxed lunch for the Chicago Police. These three also delivered the most vocal barbs to fellow chefs. Spike, who won the Sexy Salad Quickfire, had an advantage of selecting 4 items at the

market that the other chefs couldn’t use. Strategically, he chose tomatoes, bread, lettuce, and chicken, in turn making everyone else invent a boxed lunch out-of-the-box so to speak. Lisa 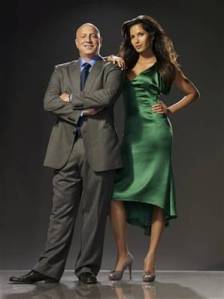 announced at the onset that everyone’s “personality sucks-a**” and later claimed that one of the chefs burned her rice. The judges, however, were put off by her raw shrimp more than the burnt rice. Andrew said he “woke up today with a f***ing fire inside my stomach, you know, like I’m going to stab somebody, or I’m going to make some amazing food.” Fortunately, he didn’t stab anyone, and unfortunately (for Andrew), the judges hated his dish and the police thought the meal was not satisfying. Andrew was furious that Lisa “threw him under the bus” by telling the judges that he didn’t use a whole grain. Andrew then admitted to the judges that he had lost his rule sheet, but in the end, he was sent home because the judges hated his dish.

Will Dale keep the Merlot for himself and retain his a**hole status with the other chefs?

Coming up is the next instalment of the popular Restaurant Wars.