Chefs competing in Hell’s Kitchen are hazed, harassed, and verbally hammered by Chef Ramsey and this week succeeded at completing their first dinner service. Then men (who Ramsey insults by calling them “donkeys”) served up their own drama complete with tears, temper tantrums, and moments of pouty-lipped whining. Ben was mortally offended by Louross, accusing him of “being a little BEEP.”

After the men lost the

gourmet pizza making challenge, Louross put a towel over his head and paced around the kitchen weeping. Ben has become a little paranoid, claiming that Chef Ramsey hates him. (Wah). Ramsey drives home the point by making Ben deliver pizzas in a wobbly delivery truck. The men’s team would have fared much better if they focused more on the task at hand and less on assigning blame and conjugating the F word. Matt, in particular, had the worst time, pleading (like a little BEEP) for his team to work together. The team repaid him by nominating him to be sent home. In a hilarious moment, Matt rescued a charred beef wellington by slicing off the top layer and exposing the tender meat inside. Unknowingly, Ramsey accepted the dish as up to his standards and sent it out to the diners. An amused Louross exclaimed, “That was the most ghetto-est kitchen move I ever saw!” The drama-free women’s team soared through this weeks challenges, prompting Ramsey to call them”darlings” ten times more than usual. Unfortunately, Vanessa had to leave the show because her severely burned hand prevented her from cooking. She went up to Ramsey’s “office” to deliver the news, an office that looked like a bat-cave. What does Ramsey do up there, anyway? To reward the contestants for their successful dinner service, Chef Ramsey decided not to send anyone home. I hope the chefs are awake enough talk to eachother next week— otherwise the BEEP will BEEP, BEEEEEEP. —PJ 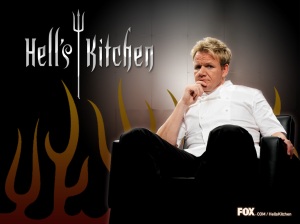 On Animal Planet’s Groomer Has It, dogs are people too. Puppy size mattered when volunteers handed over their puppies to Reality TV groomers for the third challenge. Will was awarded the “top dog” prize because he showered his Pomeranian puppy with hugs and kisses. The judges were sympathetic to Will’s transformation; last week, they poo-pooed Will for using the wrong brush on a Bearded Collie. 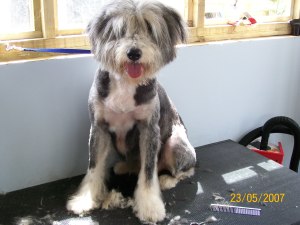 This week Will was determined to show how much “he loves dogs.” Sadly Jon was told to “leave the doghouse” after “failing to meet the grooming standards of the puppy grooming challenge.” Never mind that Jon’s puppy was a Great Pyrenese and with the exception of the Leonberger, 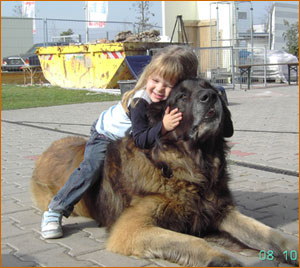 was the size of a full grown Labrador Retriever! Contestants who were given small dogs definitely had the advantage with the 90 minute time frame. But they had to please the owners

of small dogs who are very picky about their dog’s appearance. Groomers of small dogs make house calls and call themselves “dog stylists” instead of “dog groomers.” Kathleen, the”Quick Sniff” contest winner, was the only groomer allowed to choose her puppy, a white Pomeranian

named Princess who arrived wearing a little red skirt. The rest were given their puppies at random, and it took poor Jon a full hour just to dry fur of the giant Pyrenese pup. This left him little time for the actual “grooming/styling” phase. Jon chose to focus on styling the fur on the puppy’s head because did not have time take care of the other end. 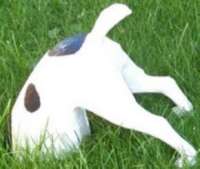 The judges offered him no sympathy and bolted from their chairs and headed right for the tail. It wasn’t fair that the judges didn’t scrutinize the other groomers, and I wish Jon could have summoned Tyra Banks

to give his dog “a Brazillian Booty Facial.” The moral of the story? Who cares if there’s a Writier’s Strike when you have shows like Grommer Has It? Next week the contestants have to design doggy outfits–another contest where size matters. What does designing clothes have to do with dog grooming? It doesn’t really matter becuase until Project Runway begins, I’m watching Groomer Has It.