DC beat Archie! And while singing his “Victory Lap” performance, viewers had to listen to the judges talk over This is the Time of My Life. I’m tired of the judges, tired of Seacrest, and tired of Coca Cola, and ready to hear DC in another venue!

The best of both Davids {American Idol} 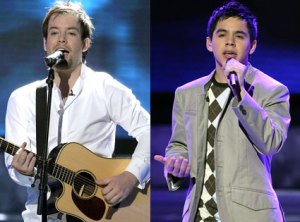 For the next two nights we’ll see the best of both Davids: David Archuleta is young, cute, and has those dreamy eyes. In my day, he’d be on the cover of Tiger Beat magazine with the caption, “Win a date with David” and “Inside, new David Archuleta trading cards–collect all 25!” David Archuleta looks like an American Idol. Yes, he’s a good singer, too. But the future of

American Idol depends on fans wanting to watch American Idol, and David Archuleta is just the guy whose wholesome good looks can whip fans into a frenzy. I don’t think David Cook has that kind of charisma. He’s older, has an established style, and can play an instrument. He’s got the Zac Efron bangs going for him, but that’s not enough; David Cook has to play his music and sing to inspire his audience. His maturity and raw talent will help him establish a long lasting recording career, but they won’t make him an American Idol. I believe David Cook will go on to be memorable, like Carrie

Underwood and Kelly Clarkson. Each finalist has a promising future, but I believe David Archuleta should become an American Idol first. American Idol has already launched David Cook’s career this season, he doesn’t need the title, nor would he represent brand as well as David Archuleta. Be sure to tune in.