Will Wii Fit get me into the Mii Generation?

This morning I checked out the Wii Website, and found an answer to the question I had been looking for:

Why do I need Wii?

Wii is not just a gaming console, it’s a reason to get together with your friends and family and play today’s hottest games. Wii offers legendary Nintendo franchises like Mario, Zelda and Metroid, as well as all new classics like Wii Sports and Wii Play. Create your own Mii character to star in Wii games. Play friends online over Nintendo Wi-Fi Connection or use the Internet Channel to surf the net from your sofa. You can even download classic Nintendo games using the Wii Shop Channel. Take a look around and see why your TV is not complete without Wii.

The people at Wii know that keeping up with technology can be overwhelming; the atmosphere of their website minimalistic, uncluttered, and spa-like (the polar opposite of MySpace). I feel like I’m at IKEA with Feng Shui. The demonstration videos for the Wii Fit remind me of the scene in The Matrix where Morpheus trains Neo to live in the grid. However, Wii is not asking me to live in their world, but to reinvent my world with the Wii brand. Apparently, the future is now.

This change is not new. I remember eating my first TV Dinner in the early 70’s (a ready made dinner in an

aluminum tray that was shaped like a TV set). Our family moved out of the dining room and into the living room to eat dinner in front of the TV Set. You were supposed to eat TV Dinners on a TV Tray. TV Trays were sold in sets of four and each tray folded out in front of you on a little stand. Thanks in part to the invention of the TV Dinner, I literally grew up in front of television. My grandmother liked to cook big Sunday dinners for us at her house and she never understood why we didn’t enjoy “dinner conversation.” In her day, family members looked forward to the eventing meal to catch up on each others’ lives and share town gossip. I remember my grandfather loved Soul Train and my grandmother had a hard time getting him to turn off the TV and come to dinner. Despite owning a big RCA Television Console, She held on to family dinner by never buying a TV Dinner or a set of TV Trays. 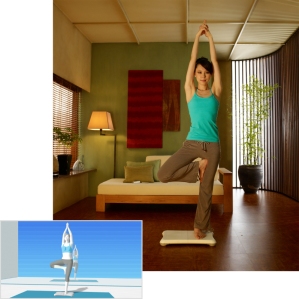 congregate together in front of the ole’ Family TV. Their motives are admirable, but do I need a Wii to have “quality family time?” Of course, sitting for hours in front of the TV is not good for you, so the makers of Wii have come up with the Wii Fit, so we all can stay active and remain together. I’m skeptical about the Wii Fit. Take a look at the Wii Fit Promo video vs. the Parody, and you’ll see why.

When I was little, we always had a bunch of neighborhood kids over at our house. Our backyard was small, but we had a sand box, a tree house, and something called a “whirli-gig.” We also shared a driveway with our next door neighbors so we could make a bike track out of chalk and ride around. We also had a kiddie pool which we set up as a bike wash. It seems that in order to have a house that kids want to come to, I need to own a Wii. A nearby park isn’t a gathering place anymore, and that makes me sad. My big Orwellian fear is that the outside world will become so undesirable, that Wii Fit is a necessity. I wonder if by purchasing a Wii, am I giving in to the possibility that I can’t think of anything else to do. Hopefully, there is a balanced middle ground. If I join the Wii/Mii Generation, I want it to be a positive change, and I welcome any of your stories and/or comments.

I enjoy family feud episodes like today’s Sister in Law from Hell because Dr. Phil is really in his element. Guests whip themselves into a Jerry Springer-esque frenzy and Dr. Phil turns down the volume with rhetorical questions like: Do I look stupid to you? No seriously, did someone tell you I wasn’t very smart? I’ve yet to see someone reply, “Actually Dr. Phil, I met 10 people waiting in line this morning who said you weren’t very smart.” But no one ever acts defiant; individual family members are too busy justifying their own point of view. In-law strife episodes have been cloned hundreds of times with different families, but there was so much animosity between today’s family, I think Dr. Phil could not afford the liability of tossing them into “The Dr. Phil House” and letting nature

take its course. Dr. P made it clear that if they sit on his stage, they become his “teaching tools.” So what is the difference between a teaching tool and a guinea pig?

Bottom line: No single person is the the only cause of family chaos. Take ownership of your role in creating the drama and kicking up the rhetoric.

Dr. Phil-ism: I tell ya’ if insight was lard, I couldn’t drink a skillet out of the whole bunch. Translation please?