Dr. Phil has often said that his guests are “teaching tools” (aka guinea pigs) for the viewing public  This week, three fighting couples enter the Dr. Phil House, a virtual Habitrail, to teach us what I learn from most of his episodes–that I am way better off than those guests!  The most notable difference between these couples and past feuding family members is that these three women are as aggressive (if not more) than their husbands and are able to stand up to Dr. Phil without looking too stupid.  Aside from the “teaching tool” motive, is the linchpin of Phil’s calling in this world: To Save the Children.  I side with him on that issue and it is one of the reasons my TiVo is still set to The Dr. Phil Show.

Senator and soon to be Secretary of State  Hilary Clinton could probably feel her ears (and cankles) burning when Mr. Weston, a defendant on Judge Judy, gave his exit interview  yesterday.  Judge Judy had dismissed Mr. Weston’s case of false arrest for assault with a deadly weapon when his neighbors claimed he had allegedly tried to run over his son with his car after being challenged to a fight.

Did he have anything to say to his neighbors?

Ready to Raise Your Child

“IT TAKES A VILLAGE TO RAISE A CHILD, AND THEY ARE NOT VILLAGE PEOPLE“

Elizabeth Berkley claims, “So many shows celebrate people who don’t really have anything” {Chelsea Lately}

On Chelsea Lately last night, special guest Elizabeth Berkley {Saved by the Bell, Showgirls,CSI Miami} said that the contestants on her show, Step It Up and Dance, “are professionals.” Berkley continued, “What sets the show apart is that people…”

“…have talent…I know, not like American Idol…” Chelsea Handler chimed in with her usual dry wit and sarcasm. Unfortunately, Berkley took the bait and blurted back, “Right, so many shows celebrate people who don’t have anything.” I’m not sure how Handler kept a straight face when she replied, “People who don’t really have…Hello?”

But talent is not what Reality TV is all about; if it was, Berkley would probably not have been selected to host Step It Up and Dance. Although Elizabeth Berkley has a few acting awards to her credit, she’s a new Bravo TV host mainly because of her infamous performance in Showgirls, for which

she won a couple of “Razzies.” Realty TV is not about talent, it’s about finding talent. Reality TV is about people with potential fighting their way for a chance at more than 15 minutes of fame. I don’t watch Step It Up and Dance, but I saw a preview for the next episode. One of the professional dancers gets injured while trying to dance suspended in a cage ball. Then the judges tell them they’re all up for elimination. Will this be the first time an entire cast goes home at the same time? I won’t lose any sleep over the outcome. Berkley 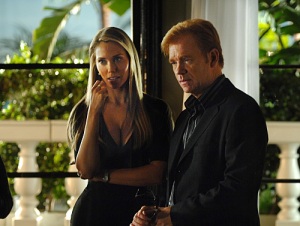 shouldn’t worry either; she’s got a supporting role in CSI Miami, a show that will be around a lot longer than Step It Up and Dance.

I had to wait until the end of the show to hear Dr. Phil say:

To ex-wife (Amanda): “If I were you, happiness would be these folks in my rear-view mirror. I feel like they don’t have a plan for life.”

To adult son living with mom (Pierre): “You’re 40, able-bodied, and intelligent–get off your dead-ass and get a job!”

To audience (PJ et al.): “Am I the only one who thinks this is just really weird?”

No, but parading out a singe nutty family for an entire “update show” is boring, Dr. Phil.

Coming up tomorrow: Round #2 with “king of moochers.” I predict Dr. P will say…(see Comment #3). I’ll be ready with the remote and delete button.

Dr. Phil reveals he’s “as flexible as a rubber hose”

Based on the title of today’s episode, Cougar Craze, I expected Dr. Phil to set the women’s movement back a few years by making the guests look desperate and needy. But Dr. Phil was more worried about the women marginalizing his age group by choosing to dive into a dating pool full of men under 30. Attractive and articulate women over 45 claim that older men “have pot bellies and are rigid and set in their ways.” The show took a bizarre twist when Dr. Phil jumped off his high chair (literally, because today everyone was seated on high wooden chairs facing the audience), unbuttoned his sport coat and said, “I don’t have a pot belly.” The audience breathed a sigh of relief when Dr. P hopped back upon his perch and didn’t remove any more clothing. Then Dr. P said, “I’m as flexible as a rubber hose!” to which the audience of women responded with a resounding, “Oh no he didn’t!” An embarrassed Robin McGraw stood up and gushed, “I’m leaving.” Dr. Phil: “I didn’t mean it like that! Right. The director made the right choice when staging this episode. The guests were seated next to, not around Dr. Phil like they needed therapy, and Dr. Phil sat poised to lead a

discussion, rather than give advice. Dr. Phil’s bottom line was: “Age should not be a deal-breaker if you both have the same mind set.” It was an entertaining show and for a minute I thought Dr. Phil might stand up on his chair and beat his chest with his fists, gorilla-style.

Maybe that footage will appear on the Dr. Phil Uncensored page.

Have a good weekend,

PLEASE RESPOND ONLY IF YOU ARE WILLING TO

APPEAR ON TELEVISION WITH DR. PHIL.”

This is what happens when you press the Click Button on the TEENS: HAVE HIGH SCHOOL DRAMA? message scrolling across the top of the Dr. Phil Official Website!

It seems that the good doctor still wants to exploit the “teens in crisis” demographic (with the exception of teens needing paternity tests ‘cuz that’s Montel’s turf).

Hopefully, Dr. P won’t send out his “staff” to post bail to “get the exclusive.” Can Dr. Phil book his teen guests without making a complete ass of himself? He has a good shot if the potential guests answer this cute list of questions. Then Dr. Phil can avoid avoid knocking on the doors of jails and mental hospitals with a camera crew in tow. You’ve got to admire his tenacity (ten-ass-ity), that is.

*Note to Dr. Phil’s copy editor: I’m sure you take home a pretty sweet paycheck from the Dr. Phil Show so do not insult Dr. Phil with your poor grammar!! This sentence contains a blatant misplaced modifier unless you meant to ask if teens do drugs and alcohol during fourth period.